Everbright-IDG Industrial Fund Invested in Wish, as the Only Chinese Investor. Represents another important move in Fund’s globalised investment strategy 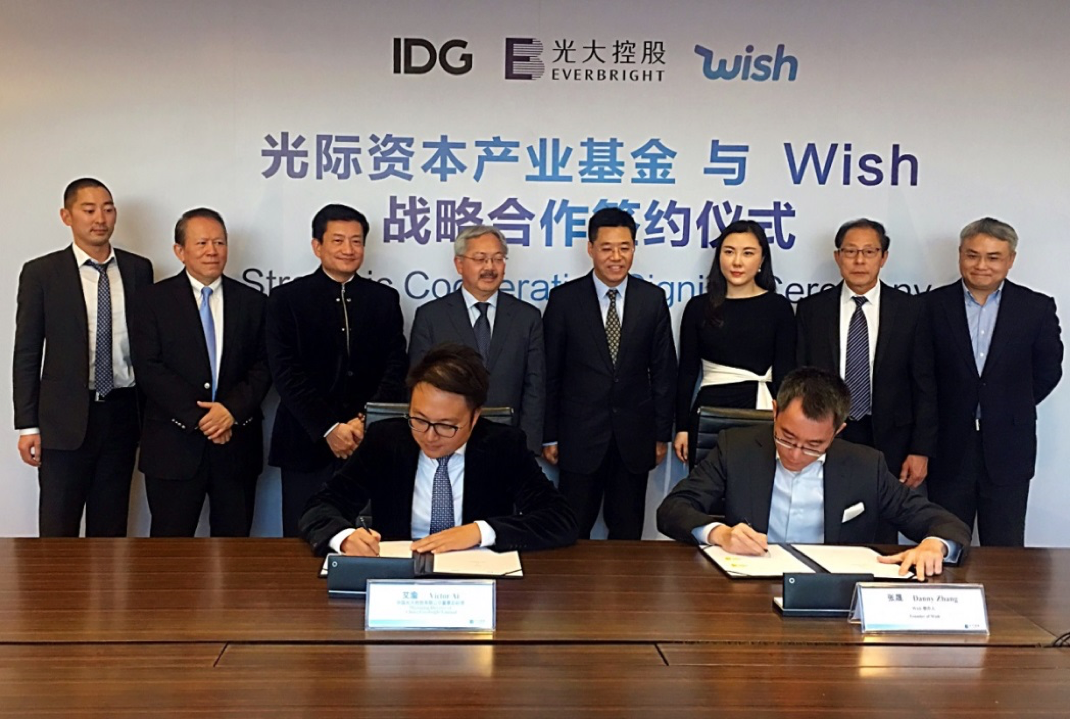 Everbright-IDG Industrial Fund (the “Fund”), partnered with China Everbright Limited (“CEL”, stock code: 165.HK) and IDG Capital, today announced its equity participation in Wish, a leading cross-border e-commerce unicorn based in Silicon Valley, through a Series F financing round. The Fund is the only Chinese investor. Other  major investors include Temasek, DST, Third Point Ventures, Founders Fund and other top international institutional investors.

Cross-border e-commerce has witnessed phenomenal growth on the back of increasingly widening economic globalisation and continued technological leapfrogging. Global cross-border B2C e-commerce, statistically estimated at USD308 billion in 2015, is expected to continue growing rapidly at a rate of 27%. As the world’s largest unlisted provider of full mobile cross-border e-commerce capabilities, Wish primarily targets young people and medium- and low-income groups in developed countries across Europe and the US, where penetration of the retail mobile terminal markets is less than 2% – compared to 19% in China – and where medium- and low-income customers account for over 60% of mobile payments.

In just four years of operation Wish has already become one of the most popular mobile shopping apps in Europe and the US. It has evolved into a gigantic B2C platform in terms of both trading volume and operating scale by featuring a combination of “mobile terminal + intelligent recommendation + cross-border e-commerce” and focusing on the shopping characteristics of differentiated consumer groups. As of early May 2017, Wish mobile APP ranked No.1 in shopping category in 27 countries, ranked No. 7 overall in android google play appstore, and ranked No.14 overall in iOS US appstore.

Wish also boasts a powerful enterprising team of star performers; co-founders Peter Szulczewski and Danny Zhang were the earliest developers of machine learning algorithms for Google and Yahoo!, respectively, and the company’s board of directors and existing shareholders also offer wealth of industry knowledge and resources.

In Beijing in December 2016, the Fund concluded a strategic framework agreement with Wish for comprehensive, in-depth cooperation to leverage the strength of each other’s resources. The Fund’s role as a co-investor in Wish marks an important initiative to further consolidate the strategic partnership between the two parties. The fundraising project also serves as a benchmark against which the Fund can actively plan its expansion efforts in the technology, media and telecommunications sector and implement its globalised investment strategy.

As the only Chinese investor, the Fund’s role demonstrates its position as “China’s most influential industrial M&A fund”. It also sets a new model for the emergence of Chinese interests in the international arena, sharing globalised investment opportunities with top international institutions.

According to the Fund, B2C, consumer finance and e-commerce are sectors with strong demand, frequent interactions with customers and enormous growth potential. The Fund is optimistic about Wish’s prospects in technology and platform integration, and hopes to identify and jointly develop more enterprises with deep industry understanding and operational capabilities as well as profound knowledge of how to transform traditional consumer industries through the internet. The Fund said it can also fully leverage synergistic benefits and create more value by improving value chain finance.

Danny Zhang, co-founder of Wish, said, “the Greater China region is important in Wish's strategic business plan. We believe in the Fund’s competitive cross-border financial ability, global resource allocation and its experience in building up China’s supply chain and financial ecosystems. As the only Chinese investor invested in Wish, the Fund’s investment represents the beginning of cooperation between the two parties. In the future we will work together to create more value.”